Yesterday I took a risk. I brought Emma on TV with me for an appearance on Living Dayton to demonstrate an at-home workout. I knew it was risky, but I also thought it could be really cute if Emma was well-behaved.  The plan was to demonstrate 4 moves that strengthen the butt and hamstrings, and also provide a cardio benefit. My intention was that Emma would “help” me with the moves. We practiced a couple times at home, but I have been sick as a dog, so that really cut back on our practice time. Watch the full segment from WDTN Living Dayton.

Click on the photo to watch the full segment and see Emma’s TV debut.

The segment definitely didn’t go as I had planned or envisioned in my head, and to be honest, I left feeling like it was a disaster. Emma was not at all interested in helping … she was interested in exploring. The TV host was a bit distracted by Emma’s choice to run around the studio (and there was glass on the ground which was causing some of the stress), but the host did a fantastic job at keeping the script moving. Despite the distractions and major multitasking, I got through all four of the moves. My assistant, Tasha, was standing in the studio and whisked Emma away about half-way through the spot. 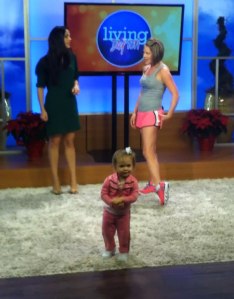 I am explaining how those moves strengthen the butt and hamstrings, and Emma is planning her escape route.

When I got home, I watched a clip that Tasha had filmed with my iPhone and I realized something important — it wasn’t as bad as I had remembered. I think I am my biggest critic, and I always have high standards for how I want things to turn out. But, adding Emma into the equation added an element of uncertainty. I had visions of her standing with me and clapping or trying the moves with me. I am not sure why I thought she would be willing to stand still, but I guess that’s a first-time mom’s poor judgement at it’s best. Ha.

I learned some important lessons yesterday. 1) Don’t take your toddler on TV with you and expect it to turn out a “certain way.” 2) Prepare a more detailed script in advance in case the questions don’t touch on the aspects you are hoping to focus on. 3) Stop being so critical of myself and such a perfectionist … have fun and enjoy the process (this one is important).

Overall, the appearance was fun, and I look forward to a second appearance on December 31 to discuss goals for 2013, promote my fitness business, and talk about my Prenatal Exercise DVD series. And I have already secured a babysitter to watch Emma on the 31st.